I know the feeling, wanting to get out of the monotonous routine, get out from the cubicle, and get away from your boring boss that has been working for the firm for 30 years. I’ve been there and I am seeing more and more that many engineers get that same itch. That need to use the other half of your brain, to engage that creative nature that has been suppressed. The desire to act on a vision, build with your hands, mix it up, do what feels natural and control your own destiny. 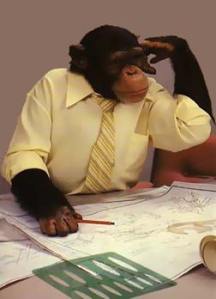 … but you have so much more potential. About 35% of the students in my MBA program that did engineering for their undergrad and are now looking to follow their true passion (which may not have been socially acceptable in their mind to their family when they were younger) to be an entrepreneur. It is only natural to ask if getting the MBA is the right bridge to connect your future:

But is the MBA the answer? Or is it just another, “do what you’re told, and I’ll give you what you want,” in this case a passing grade. I have serious concern for those engineering undergrads who want to become entrepreneurs because doing what you’re told is not an entrepreneur. Many important business tenets (that you may not experience otherwise) can definitely be learned through and MBA (such as time value of money, basic accounting, and how to work effectively in teams to accomplish a goal) but much of the same must be learned when you’re in the fire of a startup business.

First thing’s first… If you’re serious about being an entrepreneur, stop making excuses and in the words of an awesome blog I just read by @RubyBuddha:

“I hereby grant you the permission to start doing whatever you need to do
to be the person you claim you want to be.”

Thank you for reading my blog – Daniel S. Herr.
I invite you to connect with me on Twitter @DanHerr
Or follow to my blog

Think Social Media doesn’t matter? … Well you’re dead wrong. Allow me to give you a personal example of why you can’t afford to ignore Social Media…

“If you’re in the group that thinks twitter is stupid you are going to lose.”
– Erik Deckers (06-Mar-2012 in Skype conversation)

On the 12th of February, 2012 my fiancée and I had a nice bit of wine tasting over at the Wild River Grill and figured we’d give Campo another go, since it was right across the way, prior to the movie we wanted to see. We had been there once before (I had the wild-boar pasta) and dinner was okay, the service wasn’t great, we had to ask for a number of things multiple times, but the atmosphere was half entertaining. On the 12th we walked in at probably 4:45pm, the hostess was extremely snooty and while there were definitely more than 10+ open tables, she insisted that there was “no room for us” and that she had “reservations coming in within the next 45 minutes”. Okay great, sorry to bother you by bringing you business… we’re not coming back here again. We went to Chocolate Bar across the street and they were more than happy to have our business; not to mention their melted-cheese chip dish and sliders were great!

The past few months I’d been telling people, “I don’t know why people think Campo is so great. Their hostess was a complete bitch to us and their food isn’t that good. I loved Moody’s and Baxsters, but I don’t think I’ll ever go back to Campo.”

Flash-forward to April… I’ve been taking a Personal Branding course at the University of Nevada, Reno to work on my Social Media Marketing skills. One of the requirements a few weeks ago was to review some places on Yelp. On the 3rd of April I posted the following about Campo:

I didn’t expect anything to come of it, perhaps I would help someone chose Chocolate Bar as we did before wasting their time with the bitchy hostess. A few days later Mark, the Owner, shoots me a message on Yelp:

“Daniel, i am interested to hear more.  if you would not mind emailing me at ******@camporeno.com  thanks!”

Interesting, okay… I figured, what the heck, if he’s really interested I’ll tell him what is up. I shot him a quick email about the experience and not a day later he gave me a call (from my number in the signature line), and asked if I had a minute to chat.

I was blown away. Mark, the owner of Campo, Burger Me, Moody’s, & Baster’s was calling me up to apologize for the bad experience. In my opinion he did all the right things. Mark didn’t make excuses nor complain about my review; he simply apologized, explained that he did have a gal he had some issues with up front and that he had let someone go, that he was trying train his people better to accommodate both walk-in and reservations without turning anyone away as much as possible, and that he was adding seating outside this summer. Mark explained to me the health regulations, said he had not had other complaints about the wild-board pasta, but was sorry that it disagreed with me. And that was that. He didn’t beg me to come spend more money, offer me some corny discount, or request that I change my review. Nothing. Simply “I wanted to reach out and apologize for the bad experience.” Fantastic. He built a human connection with me and I felt compelled to update my review to 4 stars:

This was a first-hand, real-life example of the benefits of business involvement in Social Media. Not only did Mark deal with the bad rap I was spreading about his business, but his genuine approach was so much above and beyond the norm or ignoring that he has inspired me to spread his good word. Sure I haven’t been back yet, but the way he handled this situation definitely says something about his character, or at least his business sense. Mark, my hat off to you.