I have been working in the Solar industry for the past two years through ups and downs of start-ups, small and large Photovoltaic installations, starting by selling one-off modules to Burning Man “Burners” to get by and more recently installing large Federally funded Energy Efficiency Community Block Grant projects with Johnson Controls throughout Nevada. One thing remains, it is constantly a struggle to sell solar.

I recently had a spout with a member of Senior Corps of Retired Executives (S.C.O.R.E.) about solar in a new business model I have been working on called “CrowdSolar”. He said, “Son, I have been doing Solar since before you were born. You have a great idea here, but the numbers will never add up with Solar.” I debated with him for twenty minutes pointing out that the levelized cost of energy of solar is projected to hit grid parity within the next five years, that I understand that module prices are lower than they should be because of Chinese market saturation and unfair trading practices, and that if a system can be financed properly, like I am offering, you can get a customer to save money from day one. He wouldn’t buy it and recommended I speak with a solar businessman in the UK with whom he was familiar (I will be doing that soon).

My point is, you’d be hard-pressed to find someone that says solar electricity is a bad thing, much less “the future”. But are we all blinded? It is a large investment and the “payback period” is longer than people are typically willing to accept. My colleague Patrick shared the following with me that he recently came across regarding market penetration of energy-saving technologies: 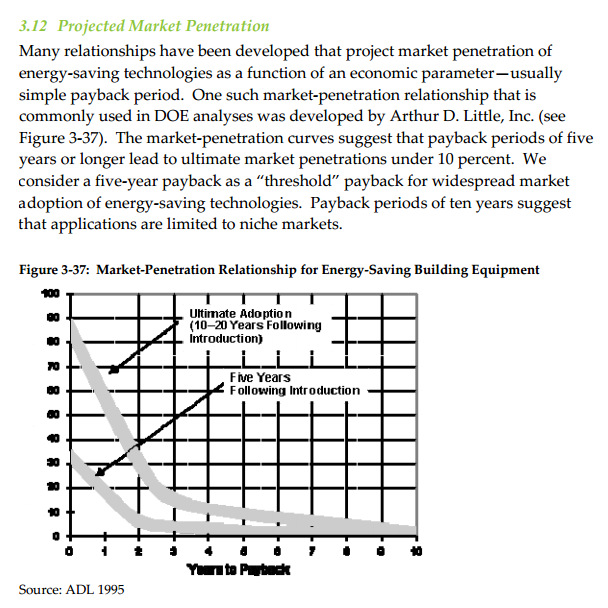 The concerning thing is that assuming this graph applies to today and Solar electricity as an “energy-saving technology” that means that adoption of the technology would be limited to well less than 10% market penetration. Does that mean then that locations such as Germany and Spain which have seem much larger adoption have exceeded the market equilibrium of the technology and will continue to face problems with their feed-in tarriffs and further adoption? I personally still think not, but I don’t have the research base to back that up.

What do you think? I invite you to comment with your thoughts below…

catalyst. tech geek. ENG & MBA. tahoe raised. helping @CastleCrowCo. been @ProjectVesto, @CleanEnergyCtr, @MartisCamper, & @Cornell I invite you to visit my personal blog DanHerr.com or connect with me @DanHerr on Twitter. View all posts by Dan Herr

I welcome your questions, thoughts, comments, critiques, and words of wisdom Cancel reply